So I thought I should do a "DahStreetsNews" post every week or w/e on grimy shit I seen while riding uptown..look out for footy of some of these events in upcoming Dah Streets Flip Cam Edits,coming soon!
1.Male Hispanic,about 38 years old steals a bike from two kids(about 10 years old)at Mullaly Skate Park after the dude was chillin with them in the park tryin to ride the ramps with them on their bike nallthat for like 30 mins.Got away.
2.Male's,one Hispanic & one Black,verbally abused a group of black females(with baby),and during the "beef" one female hit the Hispanic male with a glass in the hand for trying to film the hole mess on a flipcamra,Got away but we have the ordeal on tape.
3.Black Male getting beat up in Harlem by a group of more then 10 cops for not giving them his I.D,They took him in but we have the hole ordeal on tape.
On a more serious note.
4.Hispanic Male(Emmanuel Manu Paulino)was shoot up the block(201street)from where I chill at by Cops because he had a knife in hand......smh,shit crazy.R.I.P Homie. 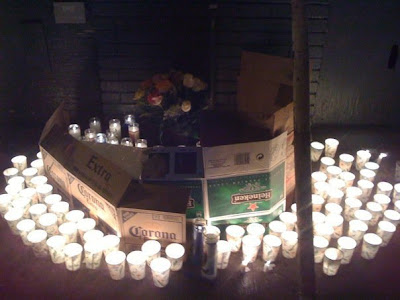 Photo via Mase,fuckthepolice.
Posted by The Artist Formerly Known As "Muffinman" at 10:15 AM